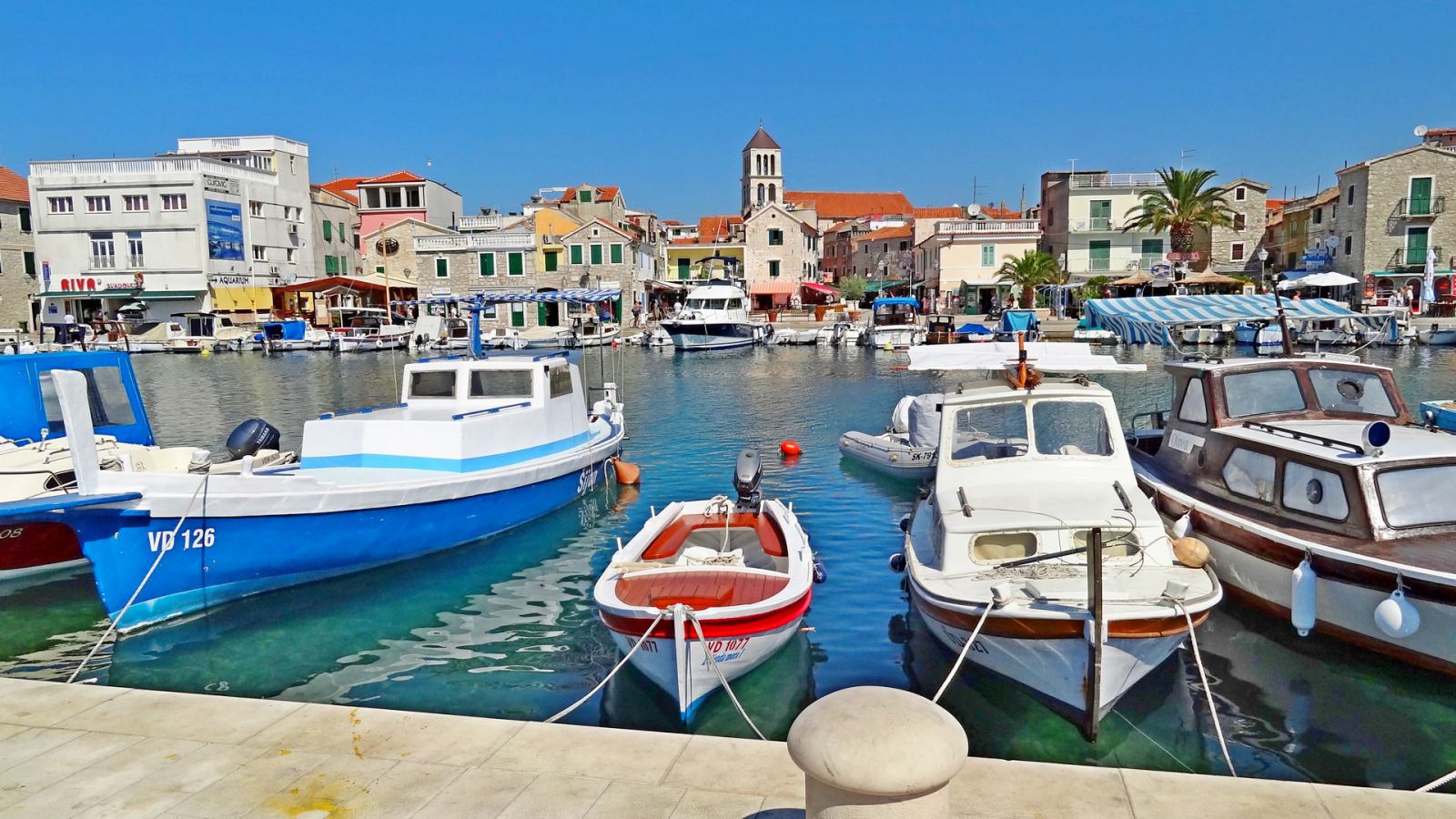 Vodice is a picturesque little town on the middle coast of the Adriatic, situated in a bay with clear sea, surrounded by vineyards and pine tree forests. It was named after water springs and has developed on this very spot because of the wells. It was exactly because of this beautiful position and rich tourist offer that Vodice developed into a desirable tourist destination – which can be proved by satisfied visitors that come back to Vodice over and over again. 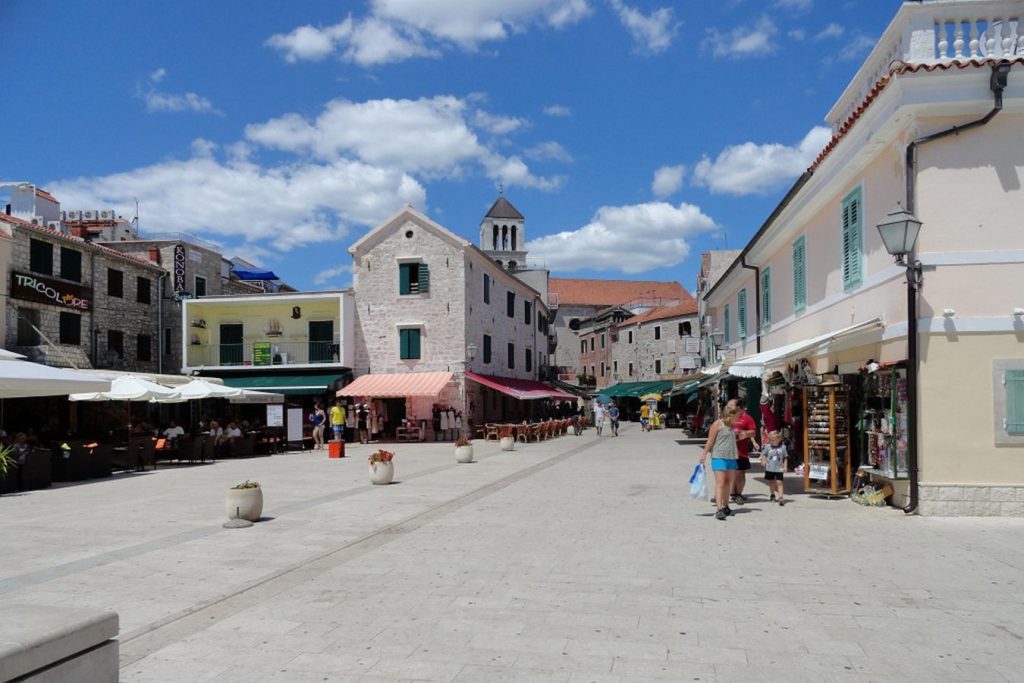 Experts have recognized the quality tourist offer of Vodice and awarded the town numerous awards. The town also received the acknowledgment Tourist flower, usually awarded to towns that invest in the improvement of its tourist offer.  The Riva in Vodice is the winner of a competition for the best Riva, while the Marina received the European Blue Flag because it meets ecological requirements. Vodice can be proud of their Blue Flag beach. 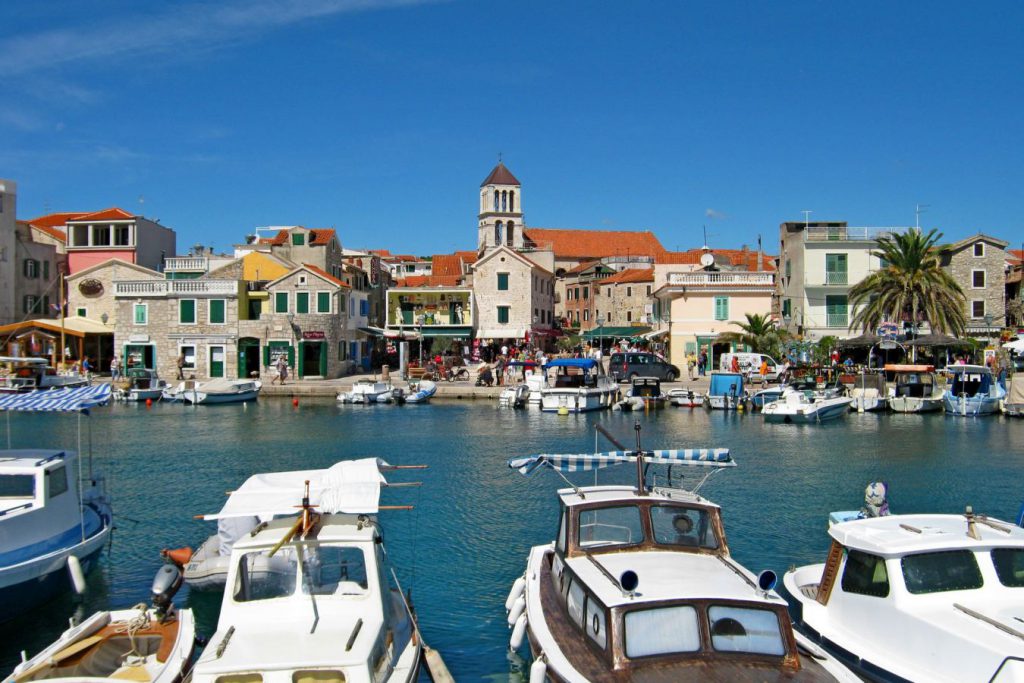 This little town distinguishes itself with a rich gastronomic offer, nightlife, cultural happenings, and kilometers of arranged beaches…. This beach surely does not lack facilities. Diving centers in Vodice will ensure you enjoy natural beauties of the Adriatic underwater and to explore the wrecks of ships that did not make it to their destinations in time. For passionate fishermen, the “Big Game Fishing” is organized from Vodice, on the “Bakul” and “Loly” boats. The most frequent target of Big Game Fishing are tuna fishes, swordfish, sharks… in Vodice there are kilometers of different cycle paths- the less difficult paths and  heavy ascents for true lovers. You can escape from summer heats into the shade of a pine tree forest along kilometers of pebble, paved and rocky beaches that stretch though Vodice (except the center of the town where the Marina is). The two most popular beaches are the Blue beach – pebble beach with shallow sea, awarded Blue flag and Hangar – located on the other side of Vodice and is as attractive as the Blue beach. 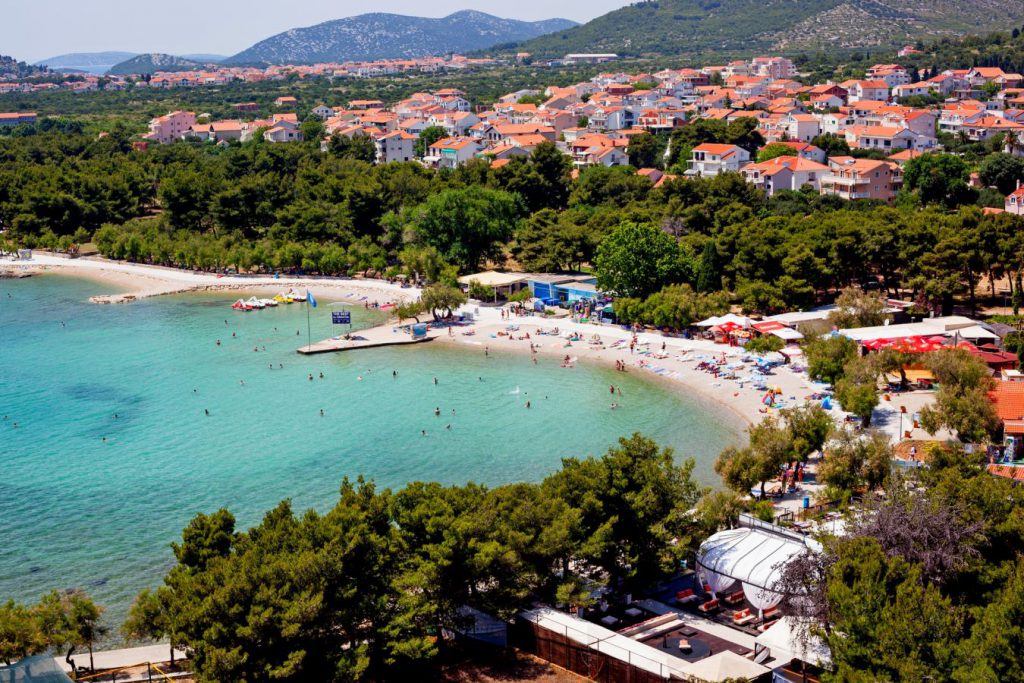 What to visit in Vodice

* Okit hill with the church of Gospa od Karmela – on the Okit hill (135m of height) there are 14 chapels “Put križa” that stretch from the foot of the hill to its highest peak. It should be mentioned that a maple tree with three larger branches, about 4m tall, grew for years in front of the church. The branch facing the church would blossom on Christmas Eve every third year.
* Church of St. Križ –  one of the most significant baroque buildings in Dalmatia, followed by the Coric tower. Be sure to visit the Aquarium and the museum of nautical tradition which holds old fishing tools, ship setups, as well as objects found among nautical archeological findings, that date from 3rd century b.c. to the Middle Ages, setups of ships Gajeta Falkusa and St. Jeronim which are the oldest images of ships on the Mediterranean.

Sights in the surroundings

* National park Krka – encompasses the area by the river Krka which flows through a picturesque 75km long canyon. Even though it can be reached by car, the most beautiful access is by boat. 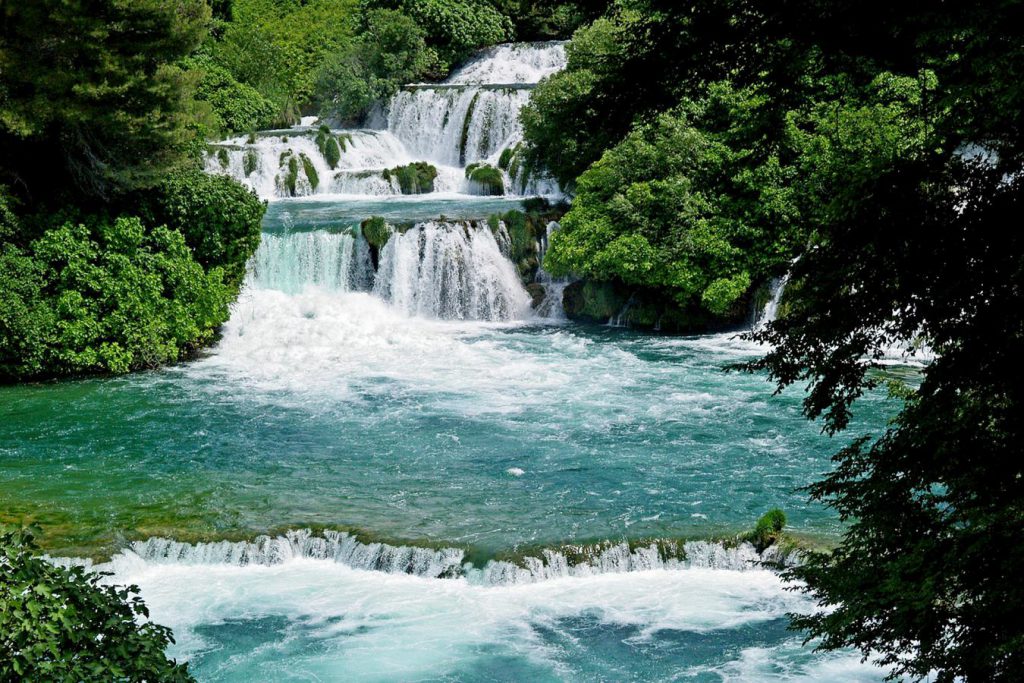 * Skradin – situated on the shore of the river Krka, where salty and sweet water mix. It is a town of traditional gatherings of Dalmatian folk music (klapa).  Besides the proximity to the NP Krka it is proud of a 2000-year-old history and a rich gastronomic offer. * National park Kornati – according to a legend, this miraculous archipelago was made out of white rocks that God was left with when he was finished creating the world, so he just tossed them around. 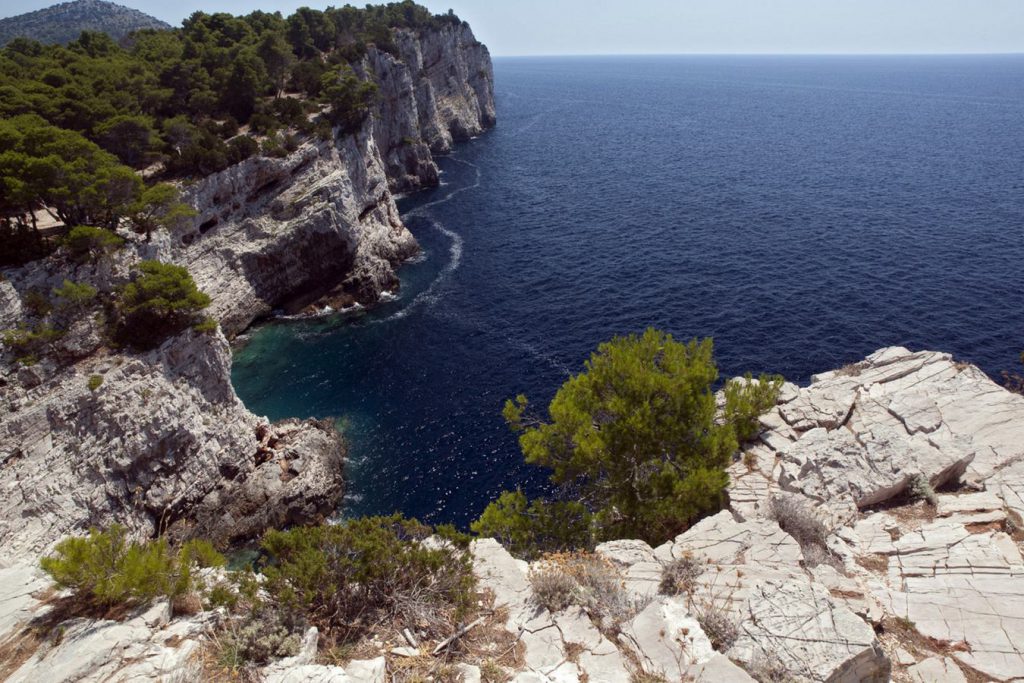 * Sibenik – the town of Sibenik is the host of the International children’s festival, the Medieval fair, the Festival of the Dalmatian song.
* The Hawk center is in Dubrava. The art of hunting with a hawk is as old as the ancient cultures of our planet. 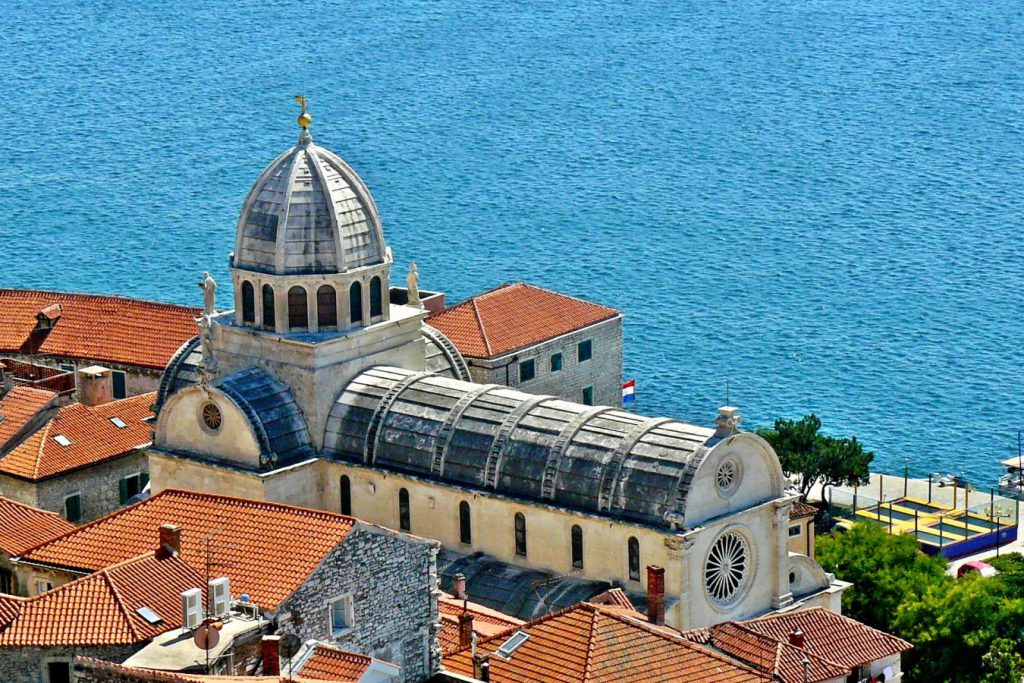 * Islands: Krapanj, Zlarin, Prvić – around 300 islands are located in the area of Sibenik-knin County, only 6 of which are inhabited. 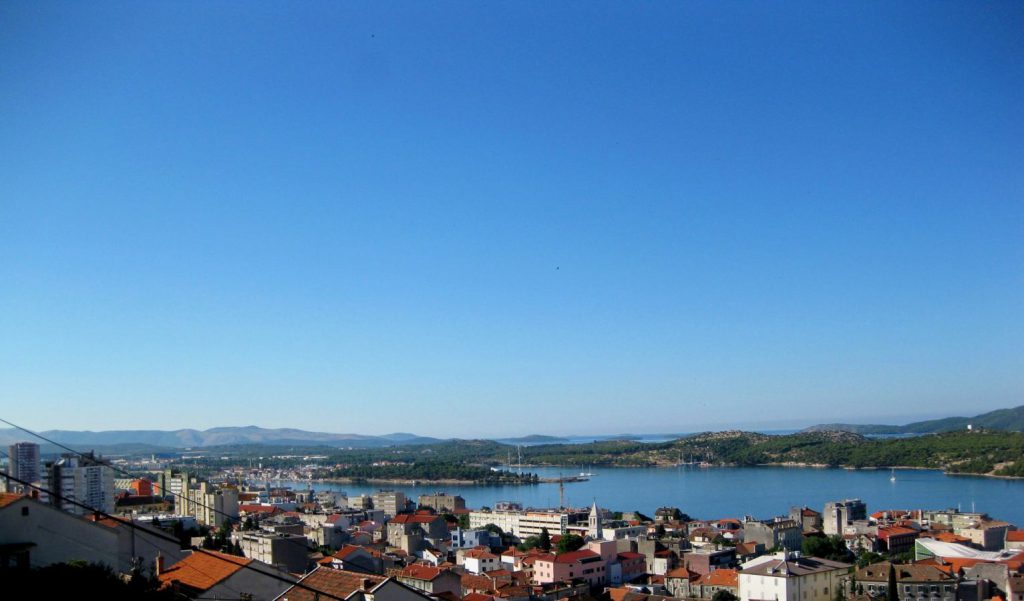 * Tribunj – a small fishing town located 2 km west of Vodice. The historical core was made on a little island connected to the mainland by a rocky bridge. The streets and squares of Vodice transform into an open Theater during summer: singers, folk music (klape), dancers, painters and stand-up comedy truly enliven the city. Numerous coffee shops and clubs come to life. Macando, Opium, Exit, Hookah bar, on the beach Makina, Cocolino, cocktail bars are some of them… as well as the most popular Hacienda, an out-of-town discoteque. 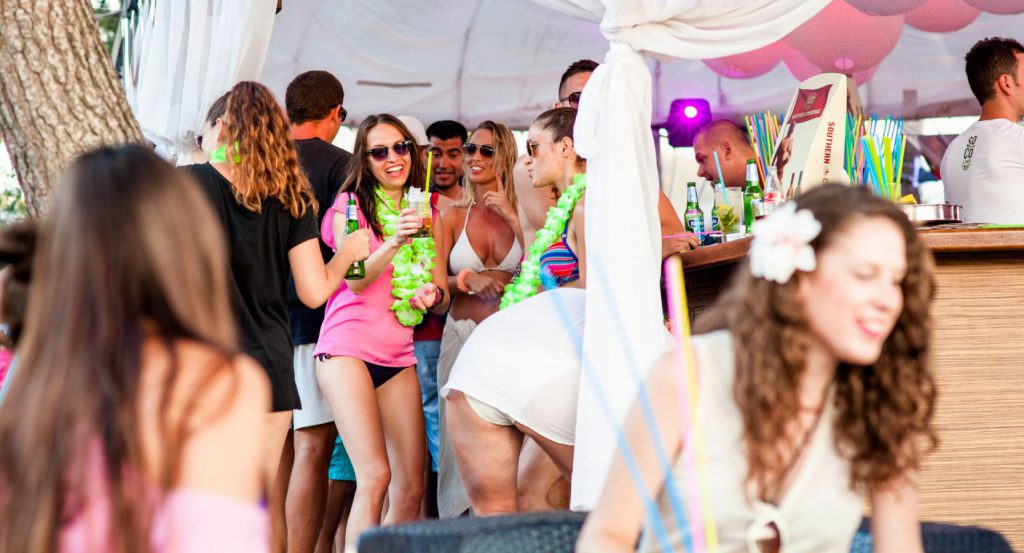 Out of countless happenings in Vodice we would single out: Eastern regatta, Day of Vodice, Motor gatherings, CMC festivals, Evenings of folk music (klape), Procession on the eve of Gospa od Karmela – 15.07. Vodice festivity. 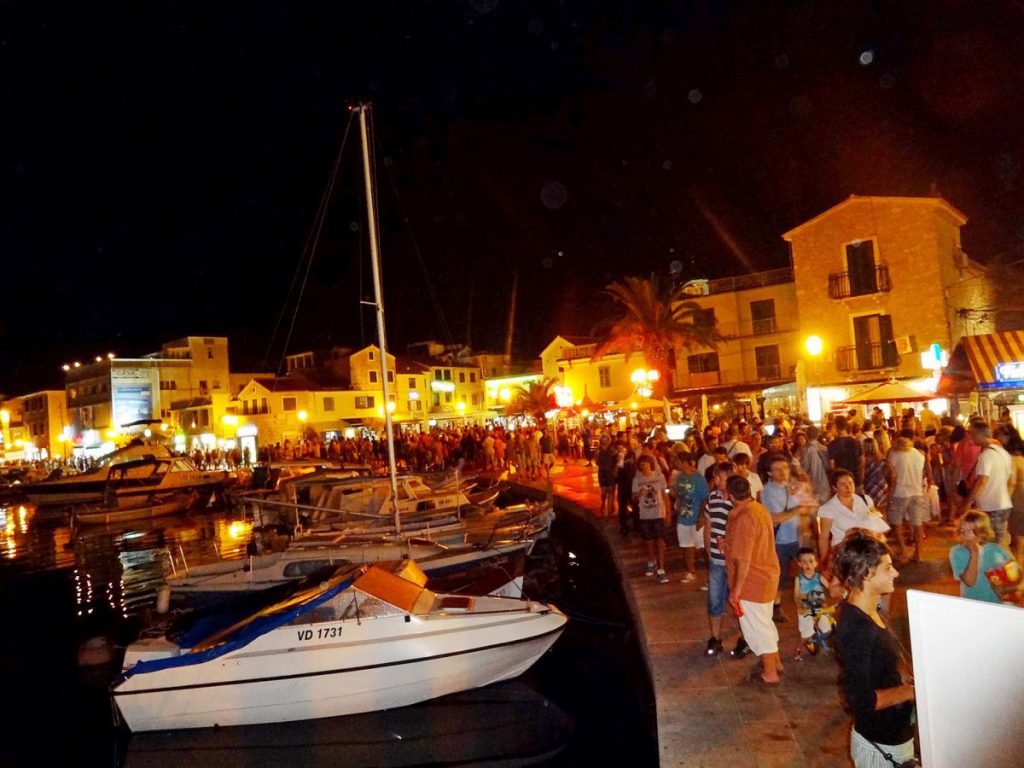 In Vodice you will savor Dalmatian specialties, as well as pleasant ambient of popular restaurants. A genuine specialty of Vodice is the sweet wine “marascina” and the best-known restaurant in Vodice is Santa Maria. For those who enjoy fish, we reccoment : Rico and Burin, taverns Rustica, Guste, Roki and Cesarica. 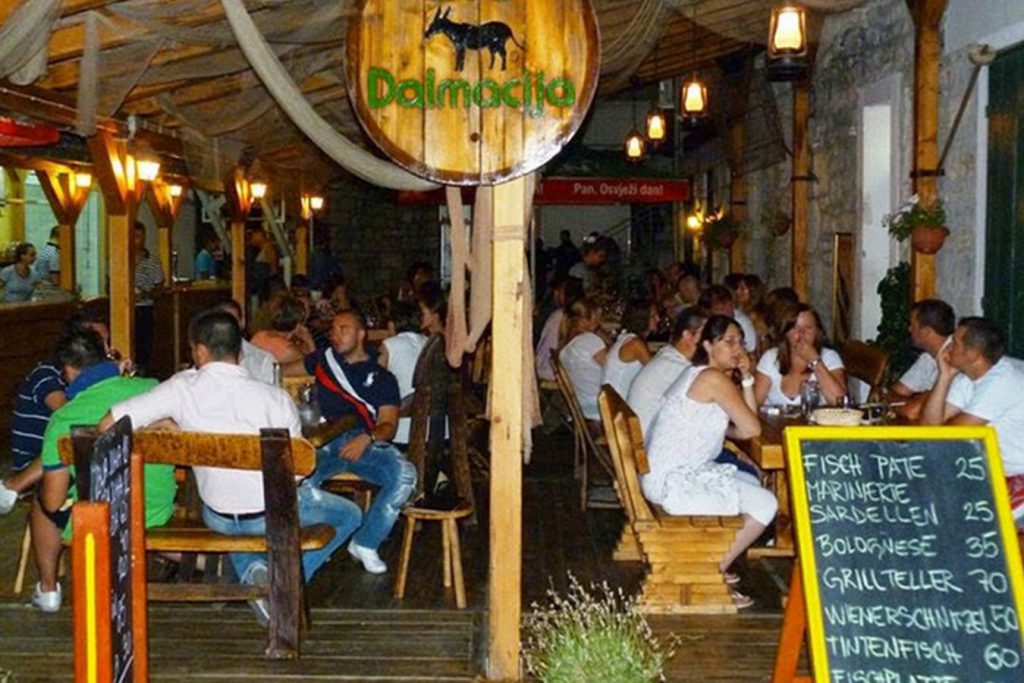 If you want to try to prepare Mediterranean and fish food, you will find the best choice of the fish on the market in Vodice in the morning (it also works late at night, sometimes even till midnight).
Besides fish, you can find fresh season fruit and vegetables. Do not miss the chance to buy some of the homemade products in Vodice, such as olive oil, homemade wine, dry figs and others. 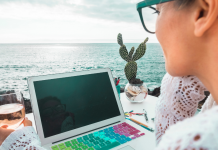 Why Croatia is an excellent destination for digital nomads? 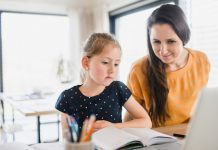 Cycling to the most attractive and most popular Croatian destinations

Lighthouses, our Shining Beacons of Freedom